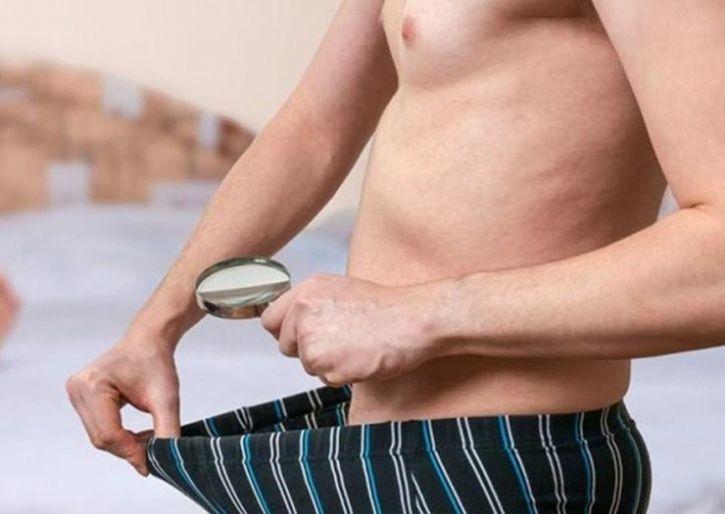 Penis Enlargement is a broad term that defines the various tips and techniques believed to make the penis bigger. It’s a sub-niche of male enhancement that includes pumps, pills, vacuums, creams, jelqing (an exercise), penis extenders and even penis enlargement surgery – all of which men hope will, you guessed it, give them a bigger penis.

If we have permission to speak freely for a moment, all of them are crap – save one.

Your penis is an organ. It’s a remarkable feat of engineering that consists of tissue, ligaments and blood vessels that are easily bruised, damaged and otherwise beaten up in ways you don’t want to think about in most so-called penis enlargement techniques.

It might also surprise you to learn that penis enlargement surgery doesn’t actually make the penis bigger.

So does this mean you’re up a certain creek without a paddle if you feel you don’t measure up? Not at all. It just means you’ll likely want to stick with a traction-based penis enlargement method, which a 2011 study says may actually work. That means a penis extender for reasons we’ll discuss.

Before we go further, a little perspective. The average penis size is 5-6 inches in length when erect and 4-5 inches in circumference.

Many guys who look to penis enlargement are well within this range. So if your penis size bothers you, measure yourself. Chances are, you’re in this range, and you really have nothing to worry about.

Some men have what’s called ‘Micropenis’. Like you might expect, that’s when the penis is unusually small. And other guys are in the 3 to 5 inch range. And others, well, they’ve got an average penis but, like many guys, want the Deluxe version.

The point we’re getting at is that, like many guys, you want a bigger penis, whether you’re average or not. That’s why you’re thinking of your penis enlargement methods. Well, pull up a chair and let’s chat.

The easiest way to make your penis bigger is to lose weight. That’s because belly fat hides more of your shaft so your penis looks smaller. Granted, it’s easy to say you’ll lose weight and much harder to do so. Still, with the many health benefits of a healthy Body Mass Index, including easier erections, stronger sex drive (to say nothing of how this will help the rest of your body), it probably can’t hurt to lose the gut. Your penis will look bigger as a result.

What about the many other penis enlargement methods you’ve heard about? Let’s look closer…

How it Works: To perform a jelq, curve your thumb and index finger around the penis while semi-erect, and “milk” the penis in a forward motion. This forces more blood into the glans and stimulates vascularity in the corpora cavernosum (the sponge-like reservoirs in the penis that hold and restrict blood during arousal).

Does it Work? Traction is one of the only (if not, the only) penis enlargement methods known to actually work. That’s according to several studies which show constant ‘stretching’ of the penis can lead to cellular division within penile tissue – and a bigger penis as a result.

With that said, you’ll likely really only see gains with hours of daily traction each day. Add that to the fact that penis exercises can actually damage your penis when done wrong, and jelqing, while intriguing, probably won’t give you a noticeably bigger penis.

Overview: A vacuum pump is a cylinder that – you guessed it, acts as a vacuum. What does a vacuum have to do with penis enlargement, you ask?

How it Works: Any guesses what you do? We’ll give you a bold hint: stick your penis in the device and the vacuum attracts and hold blood. You then clamp the penis with a ring that acts like a tourniquet, which keeps the blood in your penis, for an erection that follows.

Does it Work? Vacuum pumps can give you an erection, but they won’t give you a bigger penis. You can also damage your tissue this way.

Overview: Summon your inner-most glutton for punishment. Stretching with weights is another penis enlargement method guys attempt in their ongoing quest for a bigger Johnson. And indeed, penis stretching might stretch it a little – but at a rather high cost.

How it Works: Just like it sounds. With penis stretching, you attach weights to your flaccid penis and let gravity go to work.

Does it Work? We’re gonna step out on a limb here and say maybe attaching weights to your dick isn’t the best idea. Why’s that? Well, um, tearing tissue, bursting blood vessels and otherwise doing things to your penis that any sane dude wouldn’t do. Avoid.

Overview: Many virility pills claim they boost blood flow to the penis. That’s generally how virility pills work – you can’t have an erection without blood flow to your ticker. Since that’s one of the primary benefits of a male virility supplement like VigRX Plus, some natural male enhancement pills take things a step further and say, you guessed it. They’ll give you a bigger penis too.

Penis gels and creams give you quick arousal. Some guys might say it make their erection look bigger. But there isn’t a lot of science to back that up.

How it Works: A virility supplement is made with herbals, vitamins and amino acids that help blood flow to the penis (among other benefits). Evidence is largely anecdotal, but some customers say this helps their erections look bigger.

Does it Work? If you use a good virility supplement with clinical studies behind it, possibly. It’s important to remember though that any increases to your erection size are temporary. They will not make your flaccid penis bigger. Ditto the results you can expect with a penis gel.

Overview: The science is a little stronger for penis extenders. A penis extender is a device that attaches to your penis and enlongates it over time. You’d need to wear it at least 8 hours a day for 6-9 months, after which, one day, you look down, and – according to a study published in the Journal of Sexual Medicine, you could see an increase in flaccid penis size by 1.5cm

How it Works: Penis extenders are a traction-based penis enlargement method. They use light, yet consistent traction over time to encourage the cells in your penile tissue to divide, leading to growth of new penile tissue.

Does it Work? Several studies have been done on penis extenders; one in 2011, another in 2009. Both produced favorable results, with the former increasing flaccid penis size by 32% when worn for 6 hours a day for 6 months. From our experience, if you’re serious about penis enlargement, this is the way to do it.

Overview: This brings us to one of the more cringe-worthy and ironic penis enlargement methods. Why ironic? Well, because penis enlargement surgery exposes you to a lot of risk – and it doesn’t actually give you a bigger penis.

How it Works: There are two kinds of penis enlargement surgery: to lengthen the penis and to widen the penis.

In the former, the most common method is to cut the ligament connecting your penis to the pelvic bone. The ‘benefit’ of that? Up to an inch more of your penis shaft is visible. To prevent to ligament from re-attaching, you’d still need to stretch your penis with weights daily (see penis enlargement method #3 in this article) for about 6 months after the surgery is done.

The other option – surgery to widen the penis – is typically done with implanted fat, silicone or skin grafts.

The American Urological Association says neither practice is safe or effective for making the penis bigger. No well-recognized medical association approves penis enlargement surgery, leading some guys who have them done abroad.

Both surgeries come with side effects that can include nerve damage, lower sensitivity, erection problems and scarring – which, ironically, can make the penis smaller than what you started with.

Does it Work? Penis enlargement surgery doesn’t make the penis bigger. Nor are the satisfaction rates anything to write home about. A study published in European Urology found just 35% of surveyed men were happy with penis lengthening surgery. Half of them went on to have more surgery done.

So, Is Penis Enlargement Legit?

The million dollar question, and the reason you’re reading this article: can you make your penis bigger? Science shows it’s possible, but the only penis enlargement method we can support is that done with a penis extender.

Penis exercises like jelqing likely won’t add visible inches (and can be dangerous when done wrong). Penis pills that say they’ll give you a permanently bigger penis are full of it. Vacuum pumps do nothing more than give you an erection and stretching with weights is a place we don’t want to go.

And in case we haven’t made it clear already, penis enlargement surgery doesn’t give you a bigger dick – and for the risks involved – you’d do well to look elsewhere.

So why a penis extender? Because studies show us that traction-based penis enlargement can actually increase flaccid penis size. But it also allows you to control that traction. Too much is not safe. Yet light, consistent traction over at least 6 months is shown in clinical studies to produce new penile tissue.

At least two clinical studies over the past decade show this.

Our point is that if you want to make your penis bigger, our advice is to do it with a penis extender. They’re discreet, convenient and, many would say, the only effective route to more inches. No, penis enlargement is not a scam. It’s legit – when done correctly. Read our reviews on penis extenders if you really want to know how to make your penis bigger. Our top choice is ProExtender.